This App Note introduces an experimental way to control the room temperature in a more efficient way.

This App Note is intended to show how to implement a simple Temperature Control System using the X-Controller NearBus feature. The system works under the NearBus paradigm, this means that every sensed signal will be transmitted to the Cloud for its processing. No processing is accomplished in the remote device that works in a transparent way, controlling the sensors and actuators through the NearBios functions

The following picture shows an implementation of a simple controller (using only one temperature sensor) using two Arduino boards. 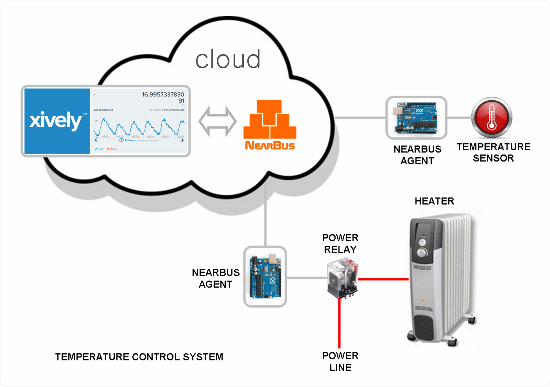 Note: It is important to remark that under the NearBus architecture it is possible to implement this solution using another microcontroller platform in a transparent way (for example a Wi-Fi board in order to simplify the system deployment thanks to the Wi-Fi connectivity).

The system shown works as a traditional digital controller. The temperature sensor is sampled each 2000 ms for example (a configurable value) and feed it to a proportional controller (with hysteresis to avoid a flapping output). The controller compare the sensed signal with its internal setting and decides to turn on or off the electrical heater in order to maintain the room's temperature as near as possible to the configured value.

In this example we used two Arduino boards (one for the temperature sensor an another for the power relay) in order to show you the way in which the NearBus system works (of course it can be implemented using only one Arduino board).

As a traditional control system this example works as a close control loop. The temperature is sensed at sampling time (eg. each 2000 ms) and then compared against the setting reference value (eg. 22 deg. C ). This resulting signal is used to control the power relay output. As usual in this type of ON/OFF controllers, a Deadban (hysteresis) module is mandatory in order to avoid a flapping output (eg. 1 deg. C).

System Components
The system is composed by three main components: 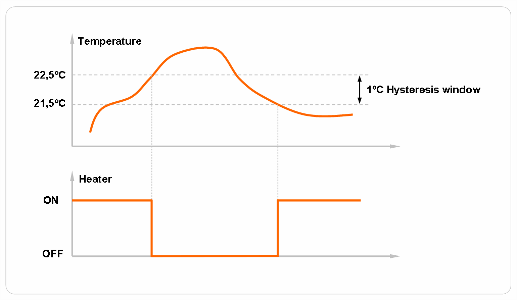 The following picture shows a real example on the Xively chart temperature register for a system working under a temperature set point of 18.5 ºC 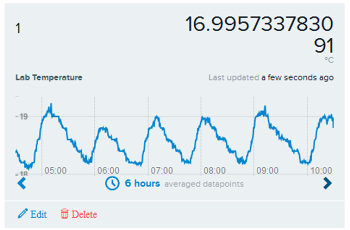